Categorized as
3558
Tagged as
Romani women with disabilities
Related

Protection of Reproductive Health or Control and Violence

Jasna Grizer, an associate of The Disability Portal, was awarded in the contest Ethical Media Reporting about Mental Health

Memories of Childhood: Growing up of Women with Disabilities

The fifth in a series of focus groups, implemented by …IZ KRUGA – VOJVODINA, was held in the Romani Women’s Association in Novi Bečej, Serbia, on 16 April. The focus group was one of the organization’s activities within the framework of the ‘Supporting CSOs in straightening the provision of services to women and girl survivors of violence, specifically to marginalized groups of women, such as women with disabilities and survivors of rape and sexual assault’ project implemented in cooperation with UN Women.

Ten Romani women with congenital or acquired physical and sensory disabilities during their life attended the focus group. Only two of them are employed and financially independent, while others are poverty-stricken, earning only by engaging in seasonal labor or from welfare benefits, the access to which is generally difficult for them. They are subject to ethnic, gender and discrimination based on their disability on daily basis, the discriminators being both people in their immediate surroundings, as well as their local community and the system in general. The Association is the only safe place providing support to them. They are independent in their everyday functioning, yet one cannot help but wonder whether they actually need no assistance services, or is it perhaps due to the fact that the very idea of personal assistance has been denied to them a priori.

Since Romani women commonly remain outside the education (and any other) system, they are often in a position to provide for themselves by hard physical labor. Poor living conditions commonly result in developing a disability.

– I’ve been doing men’s, not women’s work ever since I was a child. I could lift a hundred kilos when I was young, but now I can barely stand on my own two feet. My spine has gone so bad.

Poor health and severe disability, in turn, are in the way of doing any kind of physical labor, leaving them existentially marginalized, to such an extent that they perceive even basic medical care as luxury.

– I am not only illiterate, but also hard of hearing and I cannot see well. Who will hire me?

– I spend more on medication than on basic costs of my living.

Ethnic discrimination of Romani women is omnipresent, while facing situations in which they feel unwelcome is a part of their everyday experience. They are aware of the fact that such discriminatory attitudes have a long history and that it would be difficult to mitigate or eliminate them:

– We have always been in the last place. Putting the Romani down has been happening since the dawn of time and it will be so forever.

Ignoring their presence as a way of discrimination is most evident among the staff of the service sector and support systems. Ignoring someone is a deep and powerful message of someone’s depreciation to the level of her or his absolute obliteration. A verbalized message of ignoring someone is ‘You do not exist in my eyes!’ Be it a bakery, a grocery store or a primary healthcare center, Romani women are always the last to receive the service, regardless of their position in the queue. If they ever receive it, that is.

– Wherever we go, we get rejected. I can see I am not welcome.

They can also not exercise their basic rights in the primary healthcare and welfare centers. Instead of one-time-off financial assistance they are entitled to, the staff of these public services keeps offering them long-term solutions based on the depreciating conviction that survival of a (Romani) woman depends on a male decision:

– Get married so you would have someone to buy you medicines. This is what they have told me in the welfare center.

If they ask the medical staff in primary healthcare centers for additional information, an explanation or simply for the nurse to repeat what he or she has said because they have an auditory disability, the common response is ‘Not now, we are too busy.’ This circumstance puts them into a risk of giving their uninformed consent to – anything.

Romani women are distrusted, so the severity of their disability is under constant suspicion and evaluation. ‘Are you acting or are your really deaf?!’ is just an example of it. Romani women, therefore, cannot exercise their right to a hearing aid because they are not deaf enough. Even if they manage to exercise their right to an orthopedic aid, it usually turns out that they cannot actually use it because it does not fit them:

– I have an arm prosthesis, but I cannot do anything with it. It’s at home, collecting dust. I am much better off without it.

Romani women are deprived of their rights by their community because of their gender. Disability is an additional reason for their stigmatization. They are constantly being ridiculed, mocked, subject to depreciating comments and excess inquisitiveness.

– They shouted as I was passing ‘Look, here comes a cripple!’

– The children in the street were catcalling ‘Oh, here comes the limping woman!’

– They went alongside me in the street and imitated my limp. It took me a lot of time to get over it.

– They made fun of me because of my scar. They are still asking ‘Oh, what’s wrong with your eye?’

– They imitate the way I speak.

Derision and ridicule bears a double message. On the surface, it is a joke, yet substantially it is a hurtful depreciation undermining one’s self-esteem and discrediting the other. Romani women with disabilities are subject to it on daily basis, starting from their immediate environment and without any possibilities for protection or an adequate response to the situation. It is no wonder then that they feel unsafe in their local communities.

Some of them are coping with the consequences of physical violence, fully aware of its post-traumatic effects they are facing with insufficient expert support. At the same time, they are living in fear and under threat that the violence will happen again sooner or later:

– I have no peace from him even today. He kind of lets me go, as much as he does, so I would think I am free. Then, when I least expect it, he grabs me by my hair once again, pushes me into the car and off he drives… Once he threatened me that he would butcher my face with a razor blade. He said ‘A hundred of surgeries will not save you!’ And when he says he will do something, he does it eventually.

Nearly all focus group participants have had an experience of psychological and verbal partnership violence. They are very aware of it and are able to identify it very precisely, but they see no possibilities of sanctioning it.

– He doesn’t have to hit you, his words can kill you psychologically.

– He was jealous. I couldn’t even glance at someone! I wasn’t looking anyway, but he reproached me ‘Hey, you were looking at him, hey!’ All the time. For me it was worse than had he hit me on the head.

The violence Romani women are experiencing remains unregistered with the authorities due to several complex reasons. It is either because the perpetrator knows someone in the police, the entire community fears him, so on one dares to testify against him, or the women are aware that asking for help may expose them to an even greater risk.

– I run away, but he brings me back and beats me worse than the first time because I spoke to someone about it and asked for help.

Being economically disempowered, Romani women thus also expose themselves to an existential risk, fearing that it would affect the entire family in an adverse way if they tried to have their voices heard in order to protect themselves. Powerful feelings of fear and shame are in the background of their irresponsiveness, enduring violence and withdrawal.

It often happens that women who have experienced violence in the street obtain a right to a financial compensation. It is a result of criminal proceedings against the perpetrators, but they never receive the money eventually. At the same time, these women also end up with a fine for a public disturbance offense. Women who have experienced violence shared their bad experience with the police, which they distrust with a good reason:

– I go to the police to report it and nothing happens. They say ‘Who knows who beat you up and now you are accusing him!’

– I did not accept to go back to collect my things with the police because I know they are good friends, they’ve been eating and drinking together. The police officers would accompany me to the house, but once we’d be inside, they would tell him ‘Here she is, kill her, butcher her up!’ Do you get it? I do not trust the police. 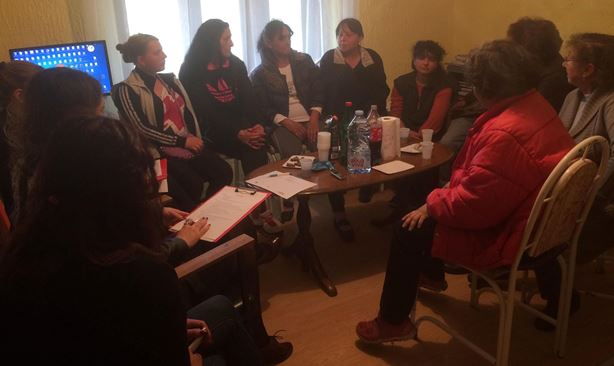 How do Romani women with disabilities imagine a better world?

– It is not possible.

– We are not asking for the impossible, just to be in the middle, like anyone else.

– Not to be hated because we are Romani. We all have the same blood.

– We’d like to have employment opportunities, so our children would have more.

– Less discrimination, racism and violence against women. More response to all these problems.

About the Author
Marijana Čanak